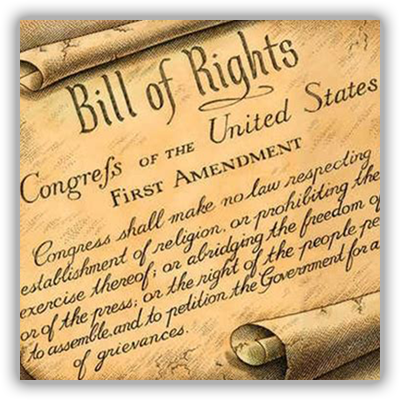 The First Amendment is stated as: "Congress shall make no law respecting an establishment of religion, or prohibiting the free exercise thereof; or abridging the freedom of speech, or of the press; or the right of the people peaceably to assemble, and to petition the Government for a redress of grievances." The freedom of religion is protected through two complementary clauses in the First Amendment: the Establishment Clause and the Free Exercise Clause.

The Establishment Clause prevents the government from, among other things, coercing an individual to attend church or to engage in any form of religious practice or exercise.

Under the Free Exercise Clause, government cannot interfere with a citizen’s right to practice their religion. This includes not only the right of individuals to inwardly hold beliefs required by their faith; it also includes the right to publicly live out those beliefs in their daily lives—including at school.

And the Religious Freedom Restoration Act (“RFRA”) protects religious freedom from infringement by the federal government unless there is a compelling reason. Many states have adopted similar state laws.